The best painting holidays in Spain

The region of La Vera awakens, as few places do, the dormant senses of the urban visitor.

Our guests will enjoy their painting holidays in an outstanding setting with plantations of olive, fig, orange and lemon trees which scent the surroundings of this colourful house.

La Vera has a microclimate with benign temperatures in winter and abundance of water. The river Tiétar marks the southern limit of the Vera, and the Gredos mountains the north. There are multiple water torrents formed by the waters of the mountains, which descends through the so-called “gorges” consisting of pebbles eroded over hundreds of years. The benignity of the climate causes tropical crops (tobacco, avocados, kiwis, kakis, etc.) to proliferate and it will allow field trips in the spring to do some plein air sketches or watercolours.

La Vera is famous for its Pimentón de la Vera, which is much appreciated by all good cooks and in its normal and spicy versions, is part of many dishes of both Extremadura and Spanish cuisine.

“Villanueva de la Vera is located in the south of the Sierra de Gredos mountains. Due to its strategic location, the area has been populated since the Iron Age.

The town’s fabulous architecture attracts visitors throughout the year. In fact, Villanueva de la Vera was declared an historic-artistic site in 1982. Its streets, the layout of the old quarter, the houses made of wood and masonry, harmonised through a series of overhangs, all combine to create a site that typifies La Vera’s quaint architectural style.

Villanueva has many places to visit, such as the church of Nuestra Señora de la Concepción. If you like religious buildings, be sure to visit the town’s two chapels: San Antón and El Cristo.

Plus, if you visit Villanueva at carnival time, you will be able to enjoy La fiesta del Peropalo, which has been declared an Extremadura Fiesta of Tourist Interest.” 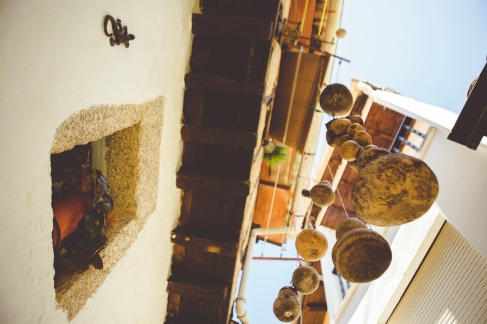 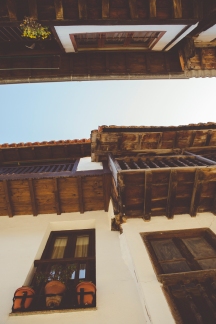 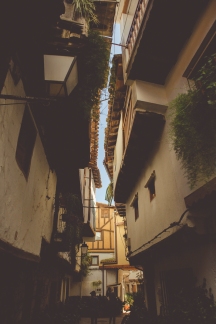 There are plenty of places to get lost and discover this secret paradise in Europe during the painting holidays:

– Monastery of Yuste, where the Emperor Charles V retired, after his abdication in 1555.

– South slope of Gredos, with the “Gorges” formed by the descending waters of the Sierra, forming pools of great beauty and surrounded by the many boulders characteristic in the area.

– An infinity of peaks in the sierras that cross the Comarca de La Vera. (Pico Almanzor of highest of the Central mountain range, of 2,592 m.).

– Castro Celta of El Raso. One of the most important archaeological sites of the Celts in the Iberian peninsula. Dated from the first and second centuries, CE, in territory of the Vetones.

– Other towns such as Jarandilla de la Vera (Castle of the Counts of Oropesa, now Parador de Turismo) and Guijo de Santa Bárbara (architecture and typical handicraft products of the region).

On the first weekend of August there is a festivity representing the old trades and traditions that were held at the beginning of the twentieth century. This festival is enlivened with folklore and the tasting of local products.

“In Jarandilla de la Vera, tradition dictates that people celebrate the Immaculate Conception by hitting each other with brooms on fire.

According to the local people, the “Escobazos” festival comes from a shepherding tradition. It seems that when the shepherds returned from the mountain, they lit up their path with blazing brooms, which they would put out by beating, hitting each other playfully, when they got to Jarandilla.

Ever since, the “Escobazos” festival has been held every year on 7th December: a festival that has been declared a Festival of Tourist Interest in Extremdura due to its unique nature.

It is held in Spring, it is a national contest of non-professional groups with free theatrical montages. It has been celebrating since the early 90’s.

Fiesta del Paseo (Our Lady of the Rosary)

They are celebrated the first Sunday of October in honour to Our Lady of the Rosary. To the religious festival are joined the ludic activities, (musical performances, bulls ..), starting from Friday to Tuesday. They are also known as Fiestas del Paseo for their social exchange with the neighbouring town of Viandar de la Vera.